We had a previous sod customer approach us with a challenge: to make a back-yard oasis around their pool. The homeowners wanted an area they could enjoy as if they were at a hotel and could entertain a large number of guests in their back yard. 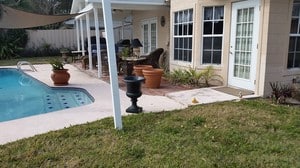 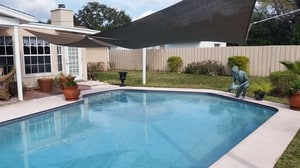 When looking at the before pictures, you can see a large portion of the area around the pool was just grass and plants, and didn't have any functional space. As part of the project, we installed a new irrigation system from scratch due to the completely new configuration of the planting beds and patio space. We also added a water line and valve system to hook up their copper statue to the pool water and create a constant water feature for the pool. The statue was surrounded with a flagstone wall that we stacked with mortar in order to make a solid wall surround for the statue. The wall also had irregular shelves added around the inside in order to set small pots or candles depending on the homeowner's taste. 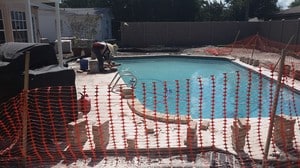 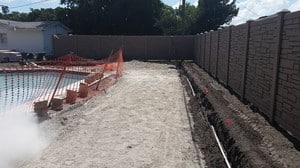 One of the challenges we had to deal with is the existing pool slab. In order to create a uniform paver deck around the pool, we were able to use a bull-nose coping directly mortared on top of the existing edge of the pool in order to keep the tile visible in the pool and create a smooth edge. With the thicker coping, we needed to use the thicker pavers on the concrete deck in order to keep the height consistent. This also gave us a chance to create a swale between the house and pool that was smooth and not obvious to the naked eye. We also added drainage in this area to remove standing water from the swale. We also added six umbrella sleeves in the pool deck on one side in order to hold umbrellas in place without the need for the ugly plastic stands.

Some of the other features the homeowners requested were a terrace or step-up area on one side of the pool where they plan to add a future pavilion as a shelter. In order to build this, we needed extra base material and used Belgard Anchor Diamond wall blocks and cap stones to create the step. The inside of the step we used a tumbled and textured paver from Belgard called "Bergerac". There were also 2 paver circles that I suggested as a design element in the paver pool deck near the step-up and also by the new arbor. These circles also used the "Bergerac" paver style.

The remaining paver deck was all made from Belgard's "Lafitt" style of paver. Once all the work was done, we applied paver sealer to all the pavers, step-up, decorative wall, and flagstone wall around the statue. Another feature they asked for was a painted arbor. This was made with pressure-treated lumber, set in footers, then left to dry out before we came back to paint it white to match the house. We did the same thing with a shower feature they requested. This arch can be seen in the photos and will be hooked up by a plumber in the near future. They wanted the shower feature in order to wash off any sand from their white sand beach that we also added. We brought a truck-load of sand in to make this beach feel like they're really on the Florida coastline. 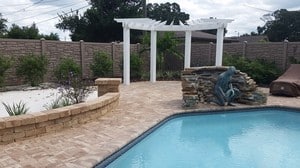 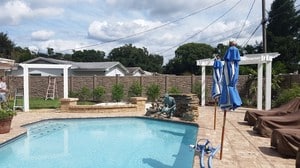 The homeowners had a vision in their heads of what they wanted and just needed a little help putting it all together as a complete project. With a little design help and picking out the right materials, they were able to get the yard they envisioned all along. We look forward to doing more work for them in the future and maybe we'll be lucky enough to make your backyard into your own private oasis.
Back to Transformations